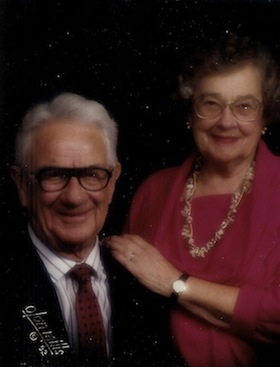 Lake Onalaska was created in 1937 by closing the gates of the newly completed Dam #7 and impounding the waters of the Mississippi and Black rivers. The contrast from a many channeled, meandering small stream to an expanse of water from the Wisconsin to the Minnesota shore gave a surge of new interest in boating, in spite of the lingering financial grip of the Depression. Two young men, Ford Stickler and Russell Aldrich, agreed that the glistening new lake at their doorstep in Onalaska offered a wonderful chance to learn sailing.

Combining their limited resources, they gained dealers franchises for Dunphy and Thompson sailboats. The only cash outlay was $147 for a new Thompson Snipe, complete with tilting rudder and paddle. These two budding entrepreneurs trailed their boat back from Peshtigo and launched it at Onalaska in July and, on the second day, promptly capsized in a howling north wind.

Originally the boat was moored just above the Onalaska dam but in 1945 Aldrich bought Stickler's interest and rented shore space from the John Sherman family on upper French Island. For the next seven years the boat was sailed from that location in company with three other sailboats, one of which was owned by Tom Markos. Tom continued to have an enthusiastic interest in sailing on Lake Onalaska until he left the city in 1960.

The formal organization of the La Crosse Sailing Club was really sparked by Dick Matheis, a young Trane Co. trainee. He enlisted Markos and Aldrich to find a boat for him and a mooring spot. Following the acquisition of a National One Design, these three people determined that the channel between Belle Island and the tip of French Island offered a fairly safe anchorage for Matheis' new boat. Had these three not been misty eyed sailing zealots, the floundering through the then marshy and brushy terrain to get to the water should have cooled their ardor for boating.

While Markos and Aldrich continued to leave their boats at the Sherman beach, they kept Matheis' enthusiasm alive by occasionally accompanying him on his treks through the swamp to his boat. As a result of the fraternity that developed from experiences too numerous to detail, it was agreed a formal organization should be created. Accordingly, a meeting was held in June of 1950 at the Petitioned Yacht Club and officers were elected. There were no by-laws. These didn't appear until they were created by Harry Schroeder many years later.

At the time of the organization there were several others who joined even though they didn't have boats, one of whom was Bill Bernard. Bill bought a "C" boat the year following and, after sailing it a few years, sold it to Paul Hughes. That boat is still sailing from the Sailing Club moorings (1980). Within a few years Aldrich and Markos moved their boats to the channel anchorage, but rather than anchoring them in mid channel some rickety docks were built along the shore of what is now Nelson Park. Each year a few more boats joined the club, though the willow saplings that served as "H" frames continued to be used as precarious supports for the docks.

The leasing of the point for Nelson Park by the county marked a milestone in somewhat more substantial mooring facilities. From this time on, metal "H” frames were used and more sturdy stringers were supplied. The channel leading to the lake was very shallow and narrow so the boats had to be towed out with some wheezy outboards and a decrepit rowboat the club had acquired. The docks that were built to be used on the lake side served a dual purpose: one, anchorage for boat during the races, and secondly, an area for the mothers and children to swim and sit while the wives patiently waited for the races to finish.

In 1964 Harry Schroeder and Russell Aldrich visited the U.S. Army Corps of Engineers in St. Paul and obtained permission and a lease to create an artificial accreted island opposite the mooring channel. A fund drive, chaired by Jim Brindley, was successful in raising $14,000, consisting for the most part of co-signed notes honored by the State Bank. Various members assumed one half of the annual interest of their notes until they were totally paid. The Brennan River Improvement Co. built the bulkhead for impounding the sand to be pumped from the channel leading to the lake and from the total harbor area. The dredging was done by the Fauver Dredging Co. Because the dredged spoils were in uneven mounds it was necessary for the Keith Vinson Co. to level off the 400 foot island and lay a crushed rock roadway immediately next to the bulkhead. The same company hauled in black dirt to a depth of 6 inches and then sodded that strip. A portable pump was provided, along with borrowed hose, to water and get the grass established in the hot sun of the following summer.

Sometime within the first ten years after the organization of the Sailing Club, one of the residents of French Island invoked what he felt was a legitimate salvage claim. Bob Luxford, who had just become a member and who, in his enthusiasm to tryout his newly acquired Thistle, capsized on the maiden sail, then was towed back to shore by an upper French Island commercial fisherman. Bob had effusively thanked the man who had come to his aid in bailing his passengers out of the chilly April waters. During the following days Bob was grateful to find that none of the crew suffered pneumonia and he felt the whole episode was behind him. Not so. Within ten days he had a bill for $50 from Hagen with the explanation that salvage rights were simply being implemented. For a number of years following this incident the 4th of July regatta was known as the "Hagen Trophy Regatta".

A few comments should be made about the gradual silting of the lake and the future. So far as the sailable areas are concerned there has been little change in the 43 years since the water was impounded, but many small islands have completely disappeared due to the erosion and wave action. The west tip of Belle Island has receded at least 150 feet because of erosion, but the channel between the main lake and the Onalaska side is now virtually free of the stumps that originally made it impossible to negotiate with a sailboat. That same channel also seems to have been scoured out to some degree so there is a greater depth. Those portions of the lake that have suffered sizeable silting are cursed with more weeds that originally, though there are some early photos of sailing on the lake that show floating weed clusters in late summer. This beautiful body of water deserves some monumental dredging and riprapping efforts in order to sustain the wonderful recreation site it provides. It certainly shouldn't be relegated to a swamp habitat for an isolated breed of ducks as the autocrats of the Fish and Wildlife their dictatorial methods would direct it.

Racing has played an important part in the lives of LAX sailors since its beginnings. In 2000, an area on the beach was improved to create spaces for boats on dollies. This encouraged Laser sailors to keep their boats on the beach to be ready for weekly racing. In 2014 a third evening of racing was established to provide race courses for Lasers on Tuesdays, Day Sailers on Wednesdays and Keelboats on Thursdays. The Day Sailors formed a fleet association with the national Day Sailer organization in 1999 with Clark Van Galder being the charter fleet captain. This job was taken over by Lee Peterson with the Daysailer Nationals being held at La Crosse in 2008.

Social events have progressed over the years. It began with a meal provided once each month with a social chair arranging for the food and door prizes. Claudia Melby served as that chair for many years. Eventually, the system developed to have each fleet hosting with the fleet captain arranging for the volunteer members to serve the meal and provide the entertainment. The socials are held on the Saturday closest to the full moon to encourage moonlight sailing. Events have included pizza parties, Caribbean Cruise parties, Fish Boils, steak-fries, burger nights, bonfire parties, and various International nights.

A shallow well was drilled in the 1980s to provide water at the club. However, the water was heavy in mineral content and not good for drinking. In 2013 a new well to the depth of about 55 ft. supplied water that was suitable for drinking and washing a boat. With no septic system, port-a-potties have provided relief for several years.

Regattas have been held on Lake Onalaska on many occasions. In 2008, the Daysailer fleet hosted the Daysailer Nationals with boats participating from both coasts and the midwest. An annual Fish Boil Regatta brought in many sailors from Wisconsin for several years. The Laser Border Challenge has attracted top-notched sailors from around the midwest. Fun races and Sunday Funday races have provided entertainment and trophies to encourage sailors to improve their sailing skills. The International Ice Boating Association has hosted races at the LAX Sailing Club when conditions have been right. Several LAX members take advantage of the winter ice and breezes with a fleet of ice boats.

In 2004, a new steel bulkhead was installed by member and large equipment operator Doug Vinson. This stabilized the shore on the bay side to connect lift-boat and floating boat docks securely. And it discourages muskrats from tunneling under the lawns. Flooding in 1986, 2003, 2008, 2017, and 2018 reminded us to be watchful of varying water levels. In 1986 several docks had to be retrieved from Rosebud Island by waders with canoes. In 2008, the floor of the shelter lifted with the rising waters and had to be repaired. The area inside the cage was raised to provide a platform for a secure storage shed for club equipment.

In 2014 Vice Commodore Greg Martin began organizing Adventurers activities with groups of various types of boats sailing to specific sites on Lake Onalaska—Brice Prairie, Sommers Chute, and Red Oak Island. Raft-ups in late summer were a highlight of the cruising season. The Club established “Sailing Spouses” in 2014 to offer the spouses of sailors a chance to get out on the water without their spouses. Jane Fiest skippered her pontoon boat with food and drinks provided.

The LAX Sailing Club is a cooperative of sailboat owners, who share the responsibilities of maintaining the club grounds and various events for sailors.